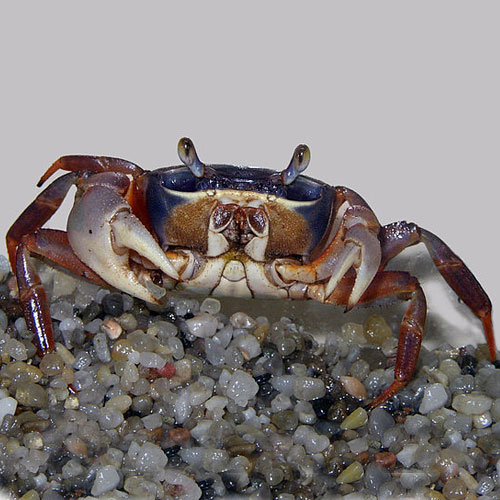 Cardisoma armatum is a species of terrestrial crab. It is sometimes referred to as the (African) rainbow crab, (Nigerian) moon crab or patriot crab.

Since this is primarily a "land crab" it should be given access to a land area in the aquarium. It is not well suited to life underwater and will definitely try to climb out if you don't provide it with somewhere to sit above the water level. Several can be kept together but they can be aggressive and rather territorial, so provide plenty of shelter in the form of bogwood and rocks, and do keep an eye out for any crabs suffering from bullying by dominant males. Most crabs are opportunists, and this one is no exception it seems. It accepts most foods, almost anything, in fact, but also has a tendency to try and eat fish. It wouldn't be wise to house it alongside fish. What it can't catch it could injure with its hefty, sharp pincers.

I have purchased two different animals from this site: a red head agama and a tomato frog. Shipping and packaging was excellent both times and extreme care was taken to ensure the animals arrived alive and in excellent health. I am the proud owner of many herps and have really bad experiences purchasing from other sources. As a result, I now buy all my reptiles and amphibians exclusively from Reptiles-N-Critters.com