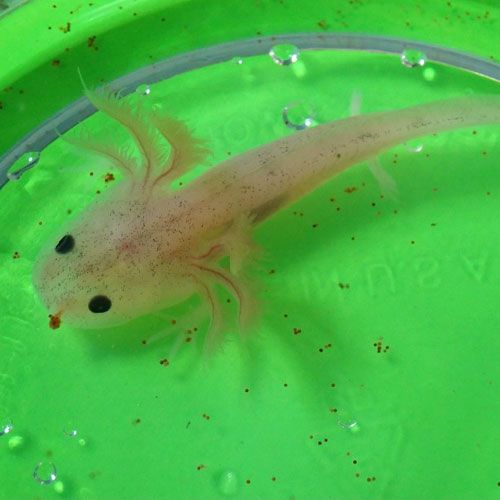 The Axolotl (Ambystoma mexicanum) is a neotenic salamander, closely related to the Tiger Salamander. Larvae of this species fail to undergo metamorphosis, so the adults remain aquatic and gilled for life. The species originates from a number of lakes, suc

The Axolotl (Ambystoma mexicanum) is a neotenic salamander, closely related to the Tiger Salamander. Larvae of this species fail to undergo metamorphosis, so the adults remain aquatic and gilled for life. The species originates from a number of lakes, such as Lake Xochimilco underlying Mexico City. This species is on the verge of extinction as the water quality of it's sole habitat in the Xochimilco region has declined as Mexico's cities human population as exploded. However, the Axolotl's we have for sale are not taken from Lake Xochimilco but from other captive populations found in the U.S. These Axolotl's are Leucistic which are without pigmentation and have been genetically modified with a Green Fluorescent Protein (GFP) that makes them look bright green fluorescence when exposed to a black light which is pretty cool if you as me.

Basic Care Guide
Axolotls live at temperatures of 54 F - 68 F, preferably 63 F - 64 F. As for all cold blooded critters, lower temperatures result in slower metabolism; higher temperatures can lead to stress and increased appetite. Chlorine, commonly added to tap water, is harmful to axolotls. A single typical axolotl typically requires a 10 gallon tank with a water depth of at least 6 inches. Axolotls spend a majority of the time at the bottom of the tank.

In captivity, axolotls eat a variety of readily available foods, including trout and salmon pellets, frozen or live bloodworms, earthworms, and waxworms. Axolotls can also eat feeder fish, but caution should be taken as fish left in the tank may eat the axolotls' exposed gills.

It should also be noted that Axolotls may suffer from intestinal impaction related issues if not kept on the correct substrate with fine sand being the preferred option. Impaction can be caused by the digestion of gravel and could be severe enough to cause death, therefore they must never be kept on gravel or stones that are smaller than the axolotls' head.