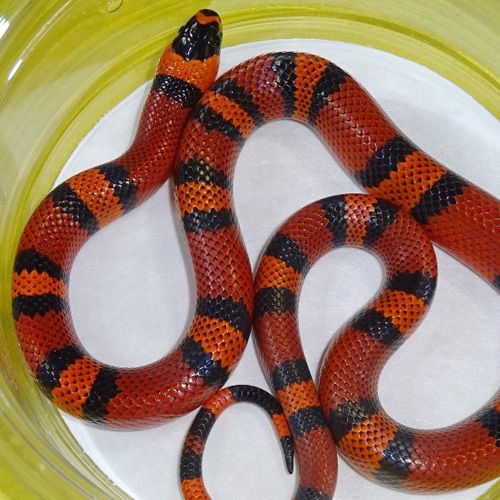 Care Guide and General Information
The milk snake, (Lampropeltis triangulum) has yellow, red, and black stripes making it appear deadly like sea snakes. The toxic sea snakes have these colors arranged differently, but in the wild most predators are fooled by their colorings.

Milk snakes inhabit south Canada and much of northern United States. They are now mostly captive bred, but buying a wild caught milk snake is still an option. These snakes can be tamed, and held. If you can care for them properly, they will thrive and flourish within their habitat.

Appearance
Milk snakes can be anywhere from 3-6 feet long, staying relatively small. They get to be about as wide as a quarter or more, and will live an average life of 15 years in captivity. Different sub-species of milk snakes may be naturally large and chunky like the Pueblan Black and Mexican Milk snake or slender like Nelson's milk snake.

Handling/Aggression
Give your snake a week or two after you get it before you start handling it. It will already be stressed out about its new home, and trying to hold it will not help its attitude. Be gentle when handling and it will not lash out. Hatchlings are more likely to bite because we are so much bigger than them.

If you get bit, place the snake back in its tank and wash off the bite with soap and water. If you have a feisty snake, hold it for a minute or so and put it back in its tank. The snake may attempt to escape at first or release a smelly but harmless odor. After some time, the snake will adjust, and you can have painlessly longer sessions of holding. Give milk snakes a couple days after they eat before handling. If you handle them after a meal, they will most likely regurgitate.

Diet
Milk snakes in the wild will eat anything from frogs to small lizards. In captivity the most appropriate food to feed a milk snake is frozen/thawed mice. Avoid wild food and live mice. They will both carry extra parasites and live mice can hurt your snake.

Housing Requirements
Milk snakes can be shy, and need at least three hides in their tank. They like tight spaces, but they should still be comfortable. If you provide too big of a hide, your snake might feel exposed and vulnerable.

Milk snakes, like most other snakes, are expert escape artists so a tight-fitting lid with a lock is necessary. Baby milk snakes do not need very much room. A 5 gallon home is appropriate. Ventilated plastic shoeboxes work well. As milk snakes grow, so should their enclosure. Adults will need a 20-30 gallon tank, and for every milk snake, add 15 gallons.

Substrate
Milk snakes enjoy burrowing and hiding in their substrate, and the best to use is cypress mulch or aspen shavings. Cedar and pine shavings are toxic to all reptiles, and should be avoided. Bed-a-beast works well, and for hatchlings, they should start off on paper towels. Sand and dirt cannot be burrowed into as easily and can be swallowed causing impaction.

Temperature
Milk snakes do not need any scalding temperatures, and a basking spot should stay from 80-85F. The cooler end room temperature. Heat lamps are better suited than under tank heaters (UTH) because they can burn themselves if they burrow down too far with a UTH. A UV bulb is not needed because they hide a lot, and will not benefit from it.

Hot rocks of any kind should be avoided because they have a reputation of getting extremely hot in some places, and have burnt many reptiles.

Water and Humidity
Milk snake tanks should not be misted. A water bowl is a must and should be big enough for the snake to comfortably be able to get in and out of, and the water should be replaced at least once a week.

Cleaning
Replace the water in the water bowl once a week, and all substrates should be replaced once every 3 months or when soiled. There is nothing much to cleaning a milk snake's cage.

Breeding
Reptile hibernation, or brumation is not needed, but bringing down the temperature about 15F will help them get into the mood when you raise the temperatures back up at the beginning of March.

When you have them meet, they should breed within a week, and be separated again. Two males should never be together or else they will fight to the death. Female milk snakes should lay between 5 and 16 eggs. These eggs need to be incubated for 55-60 days at 81-83F. When they hatch, they should be in a separate tank from the adults.

Hatchling Care
Hatchling milk snakes can be kept together in plastic shoeboxes until they get 2 feet in length. When you feed them, separate them one at a time so they all get their share. Only snakes about the same size should be kept together. Smaller snakes will be bullied, and injured.

Feed hatchling milk snakes every 5 days or so. Keeping younger milk snakes is about the same as adults except everything is smaller. Upgrade their tank, as they get longer and older. Once they are 6-8 months old, they should all have their own house.

Conclusion
Milk snakes have been kept successfully for decades and have basic care. They are great for kids and experienced reptile keepers along with anybody in between. They stay small, and are interesting animals.

My Vinegaroon came in the mail quickly and perfectly healthy and I love her! Robert Crespo was quick to help with any issues, and I really appreciate his service. Thank you guys!